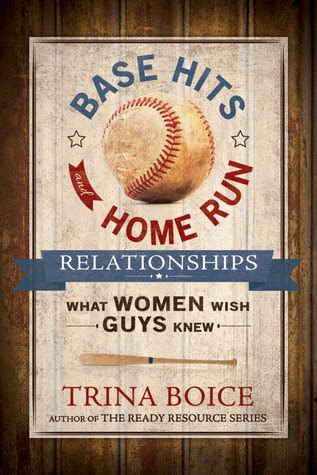 When I received the review copy for Trina Boice’s Base Hits and Home Run Relationships, I was intrigued. I usually don’t read relationship books and this one was the least likely one I’d have chosen to read on my own – and not just because it’s intended for men.

The first reason I wouldn’t have bought this book is that I don’t know much about baseball. I come from a culture where baseball is something that happens in American movies and all I know is that it involves a guy throwing a ball, a guy trying to hit the ball with a stick and a third guy who sits there and catches the ball if the second guy doesn’t do his job. Oh, and I know that if the second guy doesn’t hit the ball with the stick, that’s called a strike, even though it clearly isn’t one. I’m sure that there are other players involved (aerial camera shots hint at that), but I have no idea what they do. I guess I could wiki it, but I can never muster enough interest to.

Secondly, if I’d happened to come across the book and somehow flip it open, I wouldn’t have bought it because it doesn’t fit me. I’m a non-traditional sort of woman, gender-wise and relationship-wise. I don’t play the usual game of dating – I don’t act hard to get, I don’t take tips on how to act on dates and, in fact, I am so horrible that I even call men first after the date, if it pleases me. Usually dating books and articles tell me I’m doing it wrong, so I’ve stopped reading them and agreed to disagree.

Thirdly, if I happened to browse the end of the book, I wouldn’t have bought it because of its protestant American LDS religious references. I come from a country where an insanely high number of people are orthodox Christians. When I say that, I mean Eastern Orthodox. If you’re American, you’re probably not sure what the hell that means (I’ve talked to a few Americans who didn’t, so this opinion is admittedly based on a very small sample). Well, basically, when the Christian Church split in 1054, the West became “Catholic” and the East went “Orthodox”. Eventually, a few hundred years later some guy nailed something to a church and sparked Protestantism – thus, as far as I’m concerned, Christianity comes in 3 flavors: ours, that of the Pope, and that of the new guys on the block. Since this book is written by (and for?) people of the Latter Day Saints denomination, it’s something I really, really can’t relate to. It feels alien, strange, like a parallel universe where some things I know hold and others really don’t.

Anyway, I started reading Base Hits and Home Run Relationships thinking that the baseball side of it would be my biggest issue, seeing as I barely knew anything about it. It turns out, however, that, just like American sports movies we see here, this book talks about baseball, but it doesn’t need you to know much about it. The quotes regarding sports are usually very general ones about teams and play conditions (sometimes they don’t seem to relate much to the chapter at hand, either, but that’s another story), rather than any subtleties of the game. Not knowing about LDS practices, though, was a real issue. I can’t judge any of the advice in there related to religion because I have no idea how it relates to their official beliefs at all, or how their religious group functions and how viable some of the things described there are.

Aside from my declared, emphasized and underlined ignorance regarding some of the important parts in the book, though, I felt fairly certain that I kind of know what relationships are all about, seeing as we definitely have those here, too. Alas, cultural differences struck again.

Some of the advice in Base Hits is about getting a date – and it was as I was reading all about how you can pick up an unknown woman that I realized that cultural differences strike again. I found it hard to stomach, for example, when I came across advice for picking up women on the street – what to say, how to act… We definitely have men trying that here, too, but it’s kind of implicit that what they want isn’t a relationship (how can you want to know someone better if you don’t know them at all?), but sex. I’ve asked women here if they would stick around to listen to a guy trying to pick them up on the street, and the answer I got was “It depends on what he looked like. Women are shallow, too.” Which… yeah, okay, fair enough. If you’re up for a one-night stand, I guess looks are a big part of what you’re interested in.

I have no idea if it works differently in the US. Maybe, since the idea of the date is much stronger, if people are more used to not knowing each other nearly at all before trying to get something going… I don’t know. It felt odd to me, but maybe I’m wrong.

A lot of the advice in the book is fairly safe, though, especially when it comes to how you treat the other. It isn’t completely safe – even the universal “bring her flowers”, which we have, too, can be frowned upon by individuals. If she’s allergic to pollen, for example, or simply doesn’t like flowers that much, then bringing her flowers can be a bad idea in your particular case. (I prefer it when he brings salmon, such is life) But it’s fairly safe, as guidelines.

I also frowned on the “no sex before marriage” thing that was Strongly Implied in the book. Now, Eastern Orthodox Christianity frowns upon it, too, very much so – but only the most determined of believers care about that. Unfortunately, the stories I’ve heard of people “saving themselves” until marriage are usually not very happy: they start with early marriages and end in disappointment. I think of them as the Russian roulette of hormones, where a strong sex drive + abstinence = inability to tell if you really want to be with that person for the rest of your life or if your body is screwing with your perception.

Thus, there will never be a time when I won’t consider abstinence until marriage a bad idea, but the flip side of the coin is that Trina Boice offers sensible advice about keeping that marriage going once you’re in it. And that I can appreciate: fixing, not abandoning and trying elsewhere. There’s a certain constancy to that commitment which I think is admirable. And the little note about trying to make it work unless you’re abused made me feel more positive. Who knows, maybe for some people “saving” is the thing to do. (I could have a long conversation about the “gift” that’s “being saved”, but this is neither the time, nor the place)

It took me forever to read Base Hits, but that’s because I kept objecting to it every step of the way – otherwise, it’s a very easy read. Towards the end, however, something clicked and I realized, finally, that this book is really, really, really not aimed at people like me. It was never meant to be, just like any guide I could possibly write about relationships would be best not followed by Trina Boice’s readers. If you’re reading it and profiting from it, you’re probably a decent sort of guy who wants a decent sort of Christian girl for a decent sort of relationship, clean and God-oriented and full of normal, traditional kindness and consideration. The advice in this book would backfire spectacularly if you were trying to date me, since I want to work, achieve, play and be mischievous, and have no patience for religious practice. But, hurrah, you’re not trying to date me or my type of woman, and that’s very good and wise.

But if you’re that nice LDS guy, Trina Boice’s advice is probably going to help you. It’s not perfect, no general dating advice ever is, and it won’t solve all your issues, but it’s a good starting point. It will probably work with the majority of women you’d be interested in pursuing: helping around the house is always a good thing, too, even if she doesn’t have a day job; making things romantic is a plus. This advice is safe – it isn’t novel and I swear I’ve heard it before, but you don’t want novel advice. You want old advice, which has been approved by a lot of women in the past. And  Base Hits and Home Run Relationships brings you that, with a nice packaging of baseball which might not be anything special, but, like the zombies in Pride and Prejudice and Zombies, it might just be the thing that helps you get to the end still feeling interested.

Just take it with a grain of salt, especially the beginning about “the Game” and “gaming”: I swear it sounds like dishonest attempts to bed a woman to me, but even if it isn’t that… Little tricks to get you to date a woman and to charm her, but if you can’t keep up the charm, she’ll be disappointed. Choose something you can live with, or she’ll come to look back on the beginning of your relationship and say, reproachfully, “remember when you used to…” Settle on something you can keep up.

Also, even with the suggestions… One particularly sticks out in my memory, from the chapter on proposing to her: when you propose, put the ring in a box filled with rose petals, where there are also two living butterflies – when she opens the box and the butterflies fly out, she’ll be delighted. And while I agree that she’s very likely to be delighted (I think it’s a really cute idea, by the way), unfortunately it’s also likely that you’ll harm the butterflies and they won’t fly out because they’ll have hit themselves against the box or have been jiggled a bit – and their wings are horribly fragile. So, there’s a chance that she’ll open the box and see two maimed butterflies. You really don’t want to propose with two maimed butterflies. No matter what your first idea for an extravagant gesture might be, think it through. Make sure it doesn’t backfire.

To finish on a good note: it’s a fun book, easy to read, fairly safe to listen to. It’s oriented towards a specific sort of audience and won’t help you too much if you’re out of that target, but that’s true of all books of this sort. It’s also friendly and, while it assumes you belong to the LDS church, it doesn’t critique those who don’t, which is a pretty big plus as far as I’m concerned.

This site uses Akismet to reduce spam. Learn how your comment data is processed.