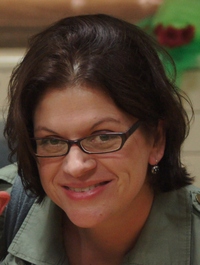 Wendy Herman is an editor for BigWorldNetwork.com, which is how I met her. For a long time she hovered semi-silently behind my own story, fixing things like a fairy tale elf (the good kind, not the mischievous kind). Then I picked up her action-drama-romance novel, Just Kill Me, which is a lovely, constantly surprising page-turner. I devoured it. There was something about the twists and turns which made me want to keep reading, and keep bouncing on my seat.

Now, I can be a nosy fan, so after about 5 seconds of hesitation, I decided to make use of the fact that I had her e-mail address, and I asked for an interview about her life, her writing, and literature in general.

From my own experience, Wendy is nice and friendly, and has a keen eye for detail. All the rest of the things I knew about her a few days ago came from online biographies: she is the wife of an Air Force pilot, she’s lived all around the world (including South Korea!), she’s a mother of four, a classically trained singer, an editor, an audiobook narrator – and the author of Just Kill Me and Queen of Diamonds (the latter of which I haven’t read yet, so there are no questions regarding it here; sorry guys, maybe later).

I soon learned that she wrote all the time as a kid, “filling notebook after notebook with short stories and, yes, ultra-cheesy poems.” But between then and now there’s a non-writing chasm. “Although I LOVE to write,” says Wendy, “my true passion is singing, so when I went to college, I couldn’t pass up a music scholarship and writing became a once-in-a-while hobby. I actually went years without writing a word, regrettably. Eight years after college, married with two kids, we were stationed in Korea when I joined a writing group made up of other Air Force spouses, and it re-awakened the spark, so to speak. I wrote my first screenplay as a result.”

After that, her sister helped create BigWorldNetwork.com and pulled Wendy into what became “the World’s Premiere Episodic Literary Network”. That’s when she started writing about a soccer mum who becomes an FBI agent. To my surprise, Wendy mixes real life with fiction, and the parts that are from real life? They’re cool…or horrible.

Q: I’ve got to ask: has the fact that your husband is in the military influence your choice of subject, or the way you treated it?

My husband just retired after 22+ years in the Air Force, and I served for a bit as well. The military is something I know a lot about, and I like to stick with what I know, mainly because I hate to do research…for reals.

Q: You have four boys, which sounds like a full-time job. How on earth do you manage to get anything done? Isn’t it a challenge to find the time to write? To edit other people’s novels? And, even more impressively, to record audiobooks both for yourself and others? (which I assume requires silence as well as time)

My four boys are seriously cray-zee most of the time, but the one thing my husband and I did right (albeit unintentionally) is that our kids are very far apart in age, ranging from 18 down to 3, so I’ve had built-in babysitters for the past several years, since I forced my oldest to get Red Cross certified at the age of 11. (The opening episode with the quarter actually happened to my now 7-year-old, every detail, and my oldest, 14 at the time, saved his life. I will force all my kids to get Red Cross certified and stay certified as long as I call the shots in their lives. Worth every penny.) I’m not ashamed to admit I pay the older two to watch the younger two, and now that our oldest is out of the house, the 13-year-old is the sitter, and he likes money. A lot. (Total honesty time, if you really listen to any of my audio recordings, you can hear the chaos…it’s never totally quiet in my house.) I have also mastered the art of editing with one hand, a toddler on my lap, in front of the current episode of “The Amazing World of Gumball.” Hilarious cartoon by the way.

Q: Why write episodic literature? As a writer, is it more or less convenient for you than publishing the whole story at once? As a reader, how do you feel about having to wait for the next installment?

I’m definitely a fan of episodic writing, and I think BWN has started something that will only spread like the plague…but in a good way. As a writer, I can have several episodes done in advance, and the weekly deadline keeps me writing daily to stay ahead. As a reader, however, I absolutely HATE having to wait! I don’t know how everyone does it! I will wait for the book and then read it all in two days. I have favorite television shows and waiting a week for the next episode is torture for me, so I tend to wait for the whole season to be on Netflix…I guess I can only hope fans of BWN aren’t like me!

Q: The cliffhangers and twists present in nearly every chapter are gripping. Do they have anything to do with the fact that the novel was first published episodically?

I think the fact that the book was written one episode at a time is definitely the reason I seem to have an “Awww…SNAP!” moment at the end of each one. Plus, when one of my editors called me the “Queen of Snap,” I had a rep to protect. The twists and turns within are just how I roll…I love it when something isn’t what it seems.

Q: Were there any major changes between the first, episodic version and the final, whole book version?

There were really just small things that needed to be smoothed out when we were doing the editing for the book, thankfully. It’s difficult to make big changes without affecting the entire story, and even though I may have done things a little differently after the fact (hindsight and all that), I didn’t want it to be a completely new story. Mainly because I was exhausted…

Q: Are you the sort of author who plans everything ahead in minute detail? Or do you go with the flow and make things up according to what feels right at that particular moment? (if it’s the latter – how did you manage to tie things up so neatly?!)

I tried to be a planner, but I just kept throwing the note cards in the trash, and I’ve now come to terms with the fact that I’m a “make the shit up as you go” kind of writer. It really shouldn’t have been that much of a surprise for me…I’m definitely like that in real life. It’s how I got through school…and college…and the military. It’s so much more fun for me to just sit down at my laptop and think, “What are my characters going to do in this episode?” In fact, sometimes, while rereading episodes, I come across really good lines that I have no recollection writing…that whole stream-of-consciousness thing. I did know how I wanted Just Kill Me to end, so I DID keep that in mind the whole time, but I had never thought about it in detail. And wrapping up a story is the hardest thing in the world, I swear! That last episode went through several edits, to which Amanda can attest. [note: Amanda is the chief editor of BigWorldNetwork.com, also known as “honey badger”, also known as “that person whom everything goes through; also, Wendy’s sister.]

Q: The summary of Just Kill Me sounds like romance, but the categories on the publisher website say ‘Action’ and ‘Drama’. Where do you think it really fits? Or are genres overrated in general?

I hate labels. Especially the ones they put right on the glass part and you can’t get it off, but anyway… My stories will ALWAYS be through-composed with a love story. Always. I love love. I believe in love, and I don’t care how lame that sounds. The action comes in because, well…authors like Nicholas Sparks bore the frickin’ hell out of me. Way too much drama and the whole damsel in distress drivel. I guess the G.I. Jane in me just craves the action, though I know I have a lot to learn about how to write action scenes. For inspiration, I read Tahereh Mafi, and, yes, Suzanne Collins, for conveying intense and descriptive action in the fewest possible words. I don’t like a lot of description. I love your Inheritance cycle, Christopher Paolini, but I don’t need to know the color of every goddam leaf in the forest…seriously. Sorry…strayed a little here…I would call my style “Goddesses who save the world, and find a man worthy of them at the same time,” or some shit.

[note: don’t worry, I didn’t catch all the references either]

Q: I remember that a few years ago another author submitted a romance novel to a publishing house (not BWN) – and she was required to modify the ending so as to make it a ‘happy ending’. She wasn’t, ahem, happy about it. Do you consider that stories with a strong romantic component need to have a happy ending? Or is it alright for it to be ambiguous, bittersweet, or even tragic?

I admit, I love a happy ending. We even have a saying in my family, that has spread to some close friends as well, that if the boy and girl end up together, it’s called a “Wending,” (Wendy + ending…get it?) and when it ends with not only the two together, but a baby bump or actual offspring from the two, it’s a “Double Wending.” You can imagine how I enjoyed “Notting Hill,” even sans action. I ate it up. That being said, if it’s done right, I have a lot of respect for an unhappy ending. (I honestly hoped Bella would die giving birth to the half human/half vampire, but that might have had more to do with how much I disliked the character, I don’t know.) [note: I wished the same, I think it’s the character] I think because I internalize the stories I read/see so much, I’m always rooting for rainbows and sunshine, hoping it will translate into my own life.

Be sure to check out Just Kill Me on Amazon here, or on BigWorldNetwork.com here! As for myself, I think I’ll move on to reading Queen of Diamonds soon, because I suddenly have an appetite for another action book with a Wending.

One Response to "Write the cool things you know: An interview with Wendy Herman"

This site uses Akismet to reduce spam. Learn how your comment data is processed.